The narrow and wide gates – what the Bible tells us about bad behavior and the higher standard applied to Christians (Matthew 7:13 – 7:14) 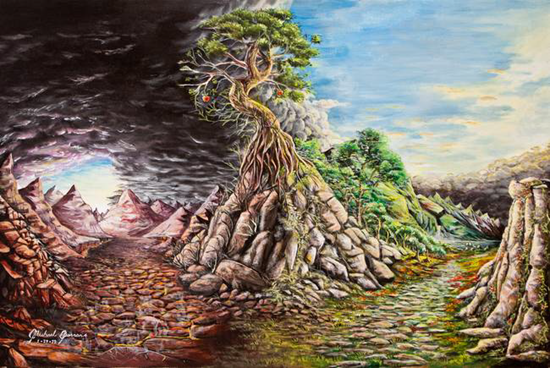 Nearing the close of the Sermon on the Mount, Jesus told his followers:

As Christians, we are called to a higher moral standard than non-believers. While following the Bible’s moral guidelines is sometimes difficult, the reward is great. In contrast, following the ways of the world is a much easier task, but inevitably leads us to destruction.

In modern-day society, this is an extremely important guideline to live by.  As the moral fibers of society decay, Christians must remain diligent and work even harder to remain righteous while recognizing that the majority (the general public) is not always right.

The concept Jesus presented, two directions, one leading to life and the other to destruction, is a common motive in the Bible and other ancient religious texts.  Just as you cannot walk on two roads, in two different directions, at the same time, with regards to Jesus’ teachings, we have two opposing possible responses – obey his teachings or reject them – there is no middle road.  With regards to the choice we make, Jesus clearly explains the consequences of rejecting biblical guidelines – total destruction.

We should take these verses as they were delivered and not extrapolate the idea that the number of people to enter heaven will be small.  What Jesus is saying is clear – righteousness is hard while following the code of Man, which is typically the more popular choice for the masses, is near effortless.  While the easier way may be simpler, the end result is certainly not pleasant.  Still, mankind, by nature, tends to employ a short-term outlook and thus, tends to foolishly follow the easier path.  Short-sighted people who are too lazy to adhere to their moral guidelines, are the ones Jesus says will find it difficult to enter heaven.

Why is the narrow road more difficult to travel?

There are various reasons why Christianity can be more difficult. Firstly, Christians are often persecuted – it’s been common in the past and is still fairly common today.

Secondly, as Jesus said, many choose to take the broader, easier road.  It is not easy being the odd-man-out and worldly temptations lie all around us.  But as our parents taught us, just because everyone else does it, does not mean it’s right.

Finally, Christians are not immune to pain, suffering, and disappointment.  But too often, we expect the rewards of righteousness to be handed out here, on earth, in the present.  That is not always the case and discovery of this reality, that Christianity is not an easy and painless solution to life’s problems, can be vexing to some making it more difficult to continue on the narrow path.

The pressure to be bad

Whether we like it or not, baked into our being is a desire to “fit in with the pack”. Inherently, as with any animal, it’s a survival instinct – there’s safety in numbers. The difficulty with  “fitting in with the crowd” is that the majority do not always do what is right. Mankind, although intelligent and capable of producing wondrous discoveries, often displays poor judgement. As a result, in modern times, the moral code has deteriorated to all-time lows and attempting to fit in without taking into consideration the teachings of the Bible, as Jesus so eloquently put it, will lead us down a path of destruction.

The cause of mankind’s poor judgement is simple to diagnose.  Our religion dictates what is right and wrong – if defines the boundaries of acceptable moral behavior.  When we exhibit unethical behavior, negative emotions are triggered – we feel guilty.  But why doesn’t this stop bad behavior entirely?  In most cases, it’s because we do bad things in the moment – it feels good.  We focus on the desired outcome and the means to get there and are able (in the short term) to justify our bad behavior by disengaging our moral reasoning and principals, possibly even dehumanizing the victim in our own mind or justifying our behavior through comparisons with others (“everybody else is doing it”).

Mankind’s lack of long-term vision permeates our society, from our personal behavior to business decisions.  It’s who we are and is likely grounded in our inherent “fight or flight” instinct – that ability to make quick decisions in order to survive.  In the short term, it’s easy to make bad decisions, especially when pressured by others.  If that quick, wrong decision feels good, we’re tempted to compulsively repeat the behavior – doing wrong time and time again.  And of course, our malleable human mind is quite adept at disengaging our moral principles on a whim.

They key for Christians is to keep in constant touch with God – reading and studying your Bible.  This keeps our moral guidelines first and foremost in our minds and thus, makes it much easier to sidestep bad behavior before that behavior roots itself deeply in our being.

Don’t look for shortcuts to God. The market is flooded with surefire, easygoing formulas for a successful life that can be practiced in your spare time. Don’t fall for that stuff, even though crowds of people do. The way to life—to God!—is vigorous and requires total attention.