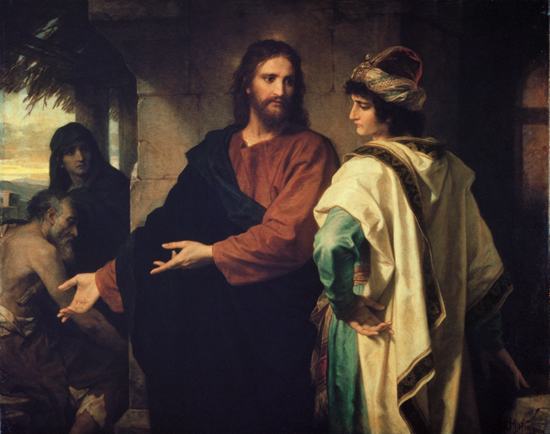 During the Sermon on the Mount, Jesus told his followers:

“Be careful not to practice your righteousness in front of others in order to be seen. If you do, you will have no reward from God.

For example, when you give to the needy, do not announce it loudly with trumpets as the hypocrites do in the synagogues and on the streets so the people will praise them. They have already received their reward in full.

When you give to the needy, do not let your left hand know what your right hand is doing so that your giving may be in secret. Then God, who sees what is done even in secret, will reward you.”

Glory from God or glory from Men

Earlier in his sermon, Jesus instructed his listeners to “let their light shine” so others could benefit from the example of their Christian deeds. However, Jesus was not implying that they should “show off” their kindness. The premise taught here is simple – righteousness, charity, and goodness in general is a matter between a person and God, not between a person and others. As Christians, we seek to be righteous because of our beliefs, not to be praised or rewarded by others. We certainly want people to see our Christian beliefs in action but we must recognize that the motivation behind our good deeds should be spiritual, not as a means to boost our self-confidence or to be applauded by men.

The subtly of sin

Jesus’ story illustrates how subtle sin may be. If done for the wrong reason, even a Christian act such as charity can be hurtful in God’s eyes. A person can be serving themselves while appearing to serve God – possibly without even recognizing it. However, a person who is truly endeavoring to follow God’s plan will naturally possess the desired motive for being righteous.

Jesus’ lesson regarding charitable giving is the first of three examples he provides regarding the theme of true Christianity vs. hypocritical acts. In the lessons to follow, Jesus will also use prayer and fasting as examples of Christian behavior we should follow to please God, not men.

The Pharisees’ use of almsgiving

The Pharisees used charitable donations as a means to gain favor with God – and attention from others. They made an effort to do good – but did so in order to seek recognition from others. This of course, is the wrong motive for acts of goodwill. Christians will inherently show compassion towards others by nature of our beliefs.

Trumpets in the synagogue?

Jesus’ statement that were are not to announce our good deeds “with trumpets as the hypocrites do in the synagogues and on the streets” should likely be taken in a figurative sense. He simply means we should not announce our charitable acts publicly to be seen by men. There is no evidence that synagogues literally allowed the blowing of trumpets inside their walls nor that there existed any sort of specific celebratory event when donations were made to the needy (we do know however, that the priests blew trumpets to announce festivals and special events). “Sound a trumpet” is most likely referring to the Pharisee practice of calling attention to their good deeds and not a literal blowing of a horn. It should be considered similar to the meaning of the modern-day phrase “toot your own horn”.

The poor and unfortunate in ancient Israel

The primary Hebrew words for “poor” address them as needy, without power, and potentially subjugated by those with greater power. Other ancient writings tell us that in general, poverty was thought of as the result of laziness. However, when the poor were treated as a group, their situation was thought to be a consequence of social factors and injustice. The same mindset exists in the modern-day.

Archaeologists and historians are still unsure how “rich” or “poor” the people of ancient Israel really were. Archeologists have found that most houses were approximately the same size so the distribution of wealth, at least for the middle class citizens, was probably fairly equal.

History shows us that ancient Israel had a progressive form of welfare too. Around 1/3 of the tithes were redistributed to the poor (fatherless children and widows). Debts were considered a form of slavery and were forgiven every seven years. Landowners were required to leave part of their crops on the land for the poor to take and the land itself was redistributed every fifty years to allow all citizens the chance to start again.  Ancient Israel’s welfare policies were far more progressive than the policies of Western countries.

Many older translations use the phrase “alms” or “almsgiving” when referencing charitable donations. Alms has little meaning to modern-day readers. In Greek, it signifies a type of pity, prompting relief given in money or kind to the poor.

There is flexibility in the translation of the first verse – “do not practice righteousness in front of others.” Older translations use the word “alms” in place of righteousness (see King James translation below) to tie the sentence in with the remaining narrative. “Righteousness” is the more accurate rendering.

6 “Be careful not to practice your righteousness in front of others to be seen by them. If you do, you will have no reward from your Father in heaven.

1 6 “Be especially careful when you are trying to be good so that you don’t make a performance out of it. It might be good theater, but the God who made you won’t be applauding.

2–4 “When you do something for someone else, don’t call attention to yourself. You’ve seen them in action, I’m sure—‘playactors’ I call them—treating prayer meeting and street corner alike as a stage, acting compassionate as long as someone is watching, playing to the crowds. They get applause, true, but that’s all they get. When you help someone out, don’t think about how it looks. Just do it—quietly and unobtrusively. That is the way your God, who conceived you in love, working behind the scenes, helps you out.

6:1 “Be careful not to display your righteousness merely to be seen by people. Otherwise you have no reward with your Father in heaven. 6:2 Thus whenever you do charitable giving, do not blow a trumpet before you, as the hypocrites do in synagogues and on streets so that people will praise them. I tell you the truth, they have their reward. 6:3 But when you do your giving, do not let your left hand know what your right hand is doing, 6:4 so that your gift may be in secret. And your Father, who sees in secret, will reward you.

6 Take heed that ye do not your alms before men, to be seen of them: otherwise ye have no reward of your Father which is in heaven. 2 Therefore when thou doest thine alms, do not sound a trumpet before thee, as the hypocrites do in the synagogues and in the streets, that they may have glory of men. Verily I say unto you, They have their reward. 3 But when thou doest alms, let not thy left hand know what thy right hand doeth: 4 That thine alms may be in secret: and thy Father which seeth in secret himself shall reward thee openly.