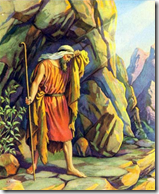 Lot’s daughters conspire to sleep with him

Before God destroyed Sodom and Gomorrah, Lot was allowed to take his two daughters to the nearby city of Zoar (ZOH-uhr). The Bible does not specify why Lot was afraid to live in Zoar but rather than live in the city, Lot fled to the mountains instead where he and his two daughters lived in a cave. Lot’s oldest daughter came up with an idea that she presented to her younger sister. She reminded her younger sister that they were still childless and there were no other men around for the sisters to have sex with. She noted that their father was getting old and suggested to the younger sister, that they give Lot wine to make him drunk and while he was drunk, they would sleep with him. The older daughter carried through with the plans and Lot was none the wiser.

This is the last we hear of Lot in the bible. Lot had chosen to live his life amongst sinners and died a penniless, drunk, old man living in a cave.

In some ways, the incestuous act of the daughters sleeping with their father, can be seen as a “rebirth” of Sodom and Gomorrah. We know that behavior is normalized through repeated exposure so we can assume that living in Sodom must have had a profound effect on Lot and his daughters. Children raised by alcoholics tend to become alcoholics themselves. Likewise, children raised by parents that smoke tend to take on the habit of smoking themselves. It stands to reason that children raised in an immoral society such as Sodom, will become perverse themselves. Where we live and whom we associate with can have a profound impact on who we grow up to become.

Living in a cave

It is ironic that Lot chose to live in a cave. When Sodom and Gomorrah were about to be destroyed, Lot was afraid to flee to the mountains as the angels had instructed. He suggested to the angels that he be allowed to flee to Zoar and they agreed to allow him to live there. Now for some reason, Lot chooses to leave Zoar and live in the mountains just as the angels had first suggested. Possibly Lot recognized the same wickedness in Zoar that he had experienced in cities of Sodom and Gomorrah.

The Moabites and Ammonites

The Moabites occupied the area east of the Dead Sea. In later stories, we will see much conflict between the Moabites and Israel. For instance, Moab denied Israel passage through its lands during the Great Exodus. Also, while Israel camped in the “plains of Moab”, the Moab women entered the Israeli camps and enticed the men. We will also see the Moab nation attacking Israel and occupying their lands for several decades. Even David would end of warring with the nation of Moab.

It is also interesting to note that their names may be a plan on words. In Hebrew, the name Moab sounds very much like the phrase “from father” while Ben-Ammi sounds much like “son of my kinsman”.

The city of Zoar

Zoar, the city Lot was afraid to live in, is less than six miles (east to southeast) from the Dead Sea shoreline. Zoar was one of the “five cities of the plain” (along with Sodom, Gomorrah, Admah (AD-muh), and Zebolim (zuh-BOH-lim). Its ruins can still be seen at the opening of a ravine of Kerak (KEHR-ahk) near the Dead Sea.

The Ammonites (descendants of Ben-Ammi) lived east of Jordan (and northeast of the Dead Sea). They were neighbors to the Moabites. Ammonites worshipped an idol named Molech (MOH-lek) whom they offered human sacrifices to. There have been many Ammonite archaeological discoveries including coffins, statues, bottles, and inscriptions (the Ammonite language is very similar to Hebrew). Archaeologists have even found seeds that were sealed in a bottle (wheat, barley, and grass seeds were discovered).

By 300 BC, these areas were insignificant settlements and by 250 BC, Ptolemy(TOL-uh-mee) II Philadelphus had rebuilt the area and renamed it Philadelphia after himself.

The Moabites (descendants of Moab) lived northeast of the Dead Sea. The famous historian, Josephus, documented how the Moabites were subdued in 200 BC. Also, a basalt stone, known as the Moabite Stone, was found in 1868. This stone contained writings by a Moab king that told of their conquest and occupation of Israel.

30 Lot and his two daughters left Zoar and settled in the mountains, for he was afraid to stay in Zoar. He and his two daughters lived in a cave. 31 One day the older daughter said to the younger, “Our father is old, and there is no man around here to lie with us, as is the custom all over the earth. 32 Let’s get our father to drink wine and then lie with him and preserve our family line through our father.”

33 That night they got their father to drink wine, and the older daughter went in and lay with him. He was not aware of it when she lay down or when she got up.

34 The next day the older daughter said to the younger, “Last night I lay with my father. Let’s get him to drink wine again tonight, and you go in and lie with him so we can preserve our family line through our father.” 35 So they got their father to drink wine that night also, and the younger daughter went and lay with him. Again he was not aware of it when she lay down or when she got up.