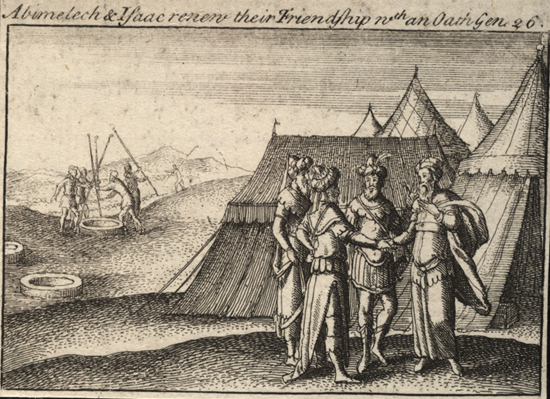 Abimelek (also spelled Abimelech) and his military commander Phicol (who acted as a witness to the events that unfolded) approached Abraham and asked that he swear to an oath, or truce of sorts, promising that they will deal faithfully with each other. Abraham agreed with Abimelek but mentioned his dissatisfaction that a well had been closed off to him by Abimelek’s servants. Abimelek responded that he had known nothing about the incident.

Talking points out of the way, the two men formed a treaty. Abraham gave Abimelek gifts of cattle and sheep and Abraham was given access to the well. Afterward, Abraham planted a tamarisk tree (or grove of trees) in the area signifying his intent to stay in the land of the Philistines for an extended period of time.

This story is important in the general context of Abraham’s quest as it points out the first foothold Abraham gained in the land of Canaan as well as providing yet another example of the “do unto others” mantra.

Ulterior motive for the treaty?

The agreement went beyond each of the participant’s personal relationship with each other and extended to their heirs, in effect, a treaty between two nations. If you recall, earlier Abraham had deceived Abimelek into believing that Sarah was his sister (instead of his wife). Abimelek could have been seeking a guarantee that Abraham would lie to him no more.

The importance of a well

In an area where water rights were a valuable commodity, this treaty would prove very important to Abraham. In those days, wells gave the right of property in the land.

The town Beersheba, that formed where the treaty was formed, is still populated today. Beersheba means “well of the oath”.  Breaking its construction down further – Be’er is the Hebrew word for well; sheva could mean “seven” (as in the seven wells of Isaac, which will be discussed in a later chapter) or “oath” (from the Hebrew word shvu’a).

The planting of a tamarisk tree

It is significant that Abraham planted a tree in the aftermath of the treaty. The tree shows that Abraham presupposed a sufficient water supply needed to survive in the area and indicates his intent to stay in the region for an extended time.

This story fits well in the context of what is about to happen next. This story puts Abraham in a comfortable position which will be upended when he is next asked to sacrifice his son, Isaac.

This is the only place in the Bible that Abimelek’s commander, Phicol, is mentioned. Phicol is a personal name that means “mighty”. He was the chief captain of the Philistine army under Abimelek.

Who was Abimelech (Abimelek)?

Abimelech (also spelled Abimelek or Avimelech) was a common name of the Philistine kings but in this context, refers to the name of a polytheistic king of Gerar.  Apart from the kings of Gerar, the Bible also records this name for (1) Abimelech (Judges), proclaimed king after the death of his father Gideon (Judges 9:1-6), (2) the son of Abiathar, and high priest in the time of David (1 Chronicles 18:16), and (3) the king of Gath better known as Achish, referred to as Abimelech or Achimelech in the title of Psalm 34.

Beersheba, which still exists today, is located less than 40 miles southwest of Jerusalem, about midway between the Mediterranean and the southern part of the Dead Sea. It is now the largest city in the Negev desert of southern Israel. Today there are several wells in the area including a mammoth 45-foot diameter well. Digging of these wells required cutting through about 15 feet of solid rock – no small feat.

Archaeologists have discovered inscriptions inside the wells that record dates the wells were repaired. One inscription shows that repairs were made to the well in the 12th century AD. Other digs in the area suggest the region has been occupied since 4,000 BC.

Excavations just outside the town’s modern-day boundary have revealed an ancient fortified town.

The tamarisk tree is a tree or shrub that is tolerant of both dry, arid regions as well as well-watered areas such as streams and marshes. The tree provides many uses including food for goats and wood for construction. It’s wood is a particularly good source of charcoal.

In addition to its physical properties, the tree is an excellent shade tree and was often used as a spot for burials.

22 At that time Abimelek and Phicol the commander of his forces said to Abraham, “God is with you in everything you do. 23 Now swear to me here before God that you will not deal falsely with me or my children or my descendants. Show to me and the country where you now reside as a foreigner the same kindness I have shown to you.”

25 Then Abraham complained to Abimelek about a well of water that Abimelek’s servants had seized. 26 But Abimelek said, “I don’t know who has done this. You did not tell me, and I heard about it only today.”

27 So Abraham brought sheep and cattle and gave them to Abimelek, and the two men made a treaty. 28 Abraham set apart seven ewe lambs from the flock, 29 and Abimelek asked Abraham, “What is the meaning of these seven ewe lambs you have set apart by themselves?”

30 He replied, “Accept these seven lambs from my hand as a witness that I dug this well.”

31 So that place was called Beersheba, q because the two men swore an oath there.

At about that same time, Abimelech and the captain of his troops, Phicol, spoke to Abraham: “No matter what you do, God is on your side. 23 So swear to me that you won’t do anything underhanded to me or any of my family. For as long as you live here, swear that you’ll treat me and my land as well as I’ve treated you.”

25 At the same time, Abraham confronted Abimelech over the matter of a well of water that Abimelech’s servants had taken. 26 Abimelech said, “I have no idea who did this; you never told me about it; this is the first I’ve heard of it.”

27 So the two of them made a covenant. Abraham took sheep and cattle and gave them to Abimelech. 28 Abraham set aside seven sheep from his flock.

29 Abimelech said, “What does this mean? These seven sheep you’ve set aside.”

30 Abraham said, “It means that when you accept these seven sheep, you take it as proof that I dug this well, that it’s my well.”

31 That’s how the place got named Beer-sheba (the Oath-Well), because the two of them swore a covenant oath there. 32 After they had made the covenant at Beer-sheba, Abimelech and his commander, Phicol, left and went back to Philistine territory.

33 Abraham planted a tamarisk tree in Beer-sheba and worshiped GOD there, praying to the Eternal God. 34 Abraham lived in Philistine country for a long time.

21:22 At that time Abimelech and Phicol, the commander of his army, said to Abraham, “God is with you in all that you do. 21:23 Now swear to me right here in God’s name that you will not deceive me, my children, or my descendants. Show me, and the land where you are staying, the same loyalty that I have shown you.”

21:24 Abraham said, “I swear to do this.” 21:25 But Abraham lodged a complaint against Abimelech concerning a well that Abimelech’s servants had seized. 21:26 “I do not know who has done this thing,” Abimelech replied. “Moreover, you did not tell me. I did not hear about it until today.”

22 And it came to pass at that time, that Abimelech and Phichol the chief captain of his host spake unto Abraham, saying, God is with thee in all that thou doest: 23 Now therefore swear unto me here by God that thou wilt not deal falsely with me, nor with my son, nor with my son’s son: but according to the kindness that I have done unto thee, thou shalt do unto me, and to the land wherein thou hast sojourned. 24 And Abraham said, I will swear. 25 And Abraham reproved Abimelech because of a well of water, which Abimelech’s servants had violently taken away. 26 And Abimelech said, I wot not who hath done this thing: neither didst thou tell me, neither yet heard I of it, but to day. 27 And Abraham took sheep and oxen, and gave them unto Abimelech; and both of them made a covenant. 28 And Abraham set seven ewe lambs of the flock by themselves. 29 And Abimelech said unto Abraham, What mean these seven ewe lambs which thou hast set by themselves? 30 And he said, For these seven ewe lambs shalt thou take of my hand, that they may be a witness unto me, that I have digged this well. 31 Wherefore he called that place Beer-sheba; because there they sware both of them. 32 Thus they made a covenant at Beer-sheba: then Abimelech rose up, and Phichol the chief captain of his host, and they returned into the land of the Philistines. 33 And Abraham planted a grove in Beer-sheba, and called there on the name of the LORD, the everlasting God. 34 And Abraham sojourned in the Philistines’ land many days.