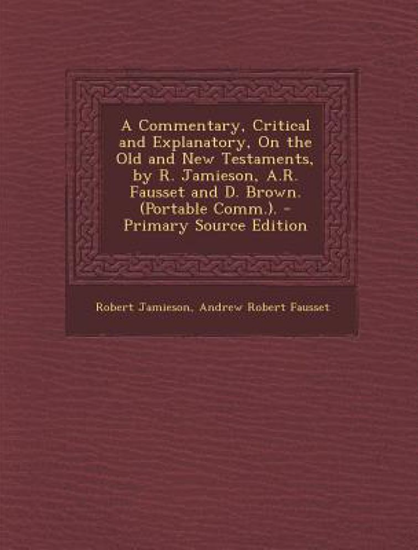 THE THIRD EPISTLE OF JOHN Commentary by A. R. Faussett

3Jo 1-14. Address: Wish for Gaius’ Prosperity: Joy at His Walking in the Truth. Hospitality to the Brethren and Strangers the Fruit of Love. Diotrephes’ Opposition and Ambition. Praise of Demetrius. Conclusion.

1. I–emphatical. I personally, for my part. On Gaius or Caius, see my Introduction before Second Epistle.

2. above all things–Greek, “concerning all things”: so Alford: in all respects. But Wahl justifies English Version (compare 1Pe 4:8). Of course, since his soul’s prosperity is presupposed, “above all things” does not imply that John wishes Gaius’ bodily health above that of his soul, but as the first object to be desired next after spiritual health. I know you are prospering in the concerns of your soul. I wish you similar prosperity in your body. Perhaps John had heard from the brethren (3Jo 3) that Gaius was in bad health, and was tried in other ways (3Jo 10), to which the wish, 3Jo 2, refers.

3. testified of the truth that is in thee–Greek, “of” (or ‘to’) thy truth”: thy share of that truth in which thou walkest [Alford].

even as thou–in contrast to Diotrephes (3Jo 9).

4. my children–members of the Church: confirming the view that the “elect lady” is a Church.

whatsoever thou doest–a distinct Greek word from the former “doest”: translate, “workest”: whatsoever work, or labor of love, thou dost perform. So Mt 26:10, “She hath wrought a good work upon me.”

and to strangers–The oldest manuscripts, “and that (that is, and those brethren) strangers.” The fact of the brethren whom thou didst entertain being “strangers,” enhances the love manifested in the act.

6. borne witness of thy charity before the church–to stimulate others by the good example. The brethren so entertained by Gaius were missionary evangelists (3Jo 7); and, probably, in the course of narrating their missionary labors for the edification of the Church where John then was, incidentally mentioned the loving hospitality shown them by Gaius.

after a godly sort–Greek, “in a manner worthy of God,” whose ambassadors they are, and whose servant thou art. He who honors God’s missionary servants (3Jo 7), honors God.

taking nothing–refusing to receive aught by way of pay, or maintenance, though justly entitled to it, as Paul at Corinth and at Thessalonica.

Gentiles–the Christians just gathered out by their labors from among the heathen. As Gaius himself was a Gentile convert, “the Gentiles” here must mean the converts just made from the heathen, the Gentiles to whom they had gone forth. It would have been inexpedient to have taken aught (the Greek “meden” implies, not that they got nothing, though they had desired it, but that it was of their own choice they took nothing) from the infant churches among the heathen: the case was different in receiving hospitality from Gaius.

8. We–in contradistinction to “the Gentiles” or “heathen” referred to, 3Jo 7.

therefore–as they take nothing from the Gentiles or heathen.

receive–The oldest manuscripts read, “take up.” As they “take” nothing from the Gentiles, we ought to take them up so as to support them.

to the truth–that is, to promote the truth.

9. I wrote–The oldest manuscripts add “something”: a communication, probably, on the subject of receiving the brethren with brotherly love (3Jo 8, 10). That Epistle was not designed by the Spirit for the universal Church, or else it would have been preserved.

unto the church–of which Gaius is a member.

loveth … pre-eminence–through ambition. Evidently occupying a high place in the Church where Gaius was (3Jo 10).

among them–over the members of the Church.

receiveth us not–virtually, namely, by not receiving with love the brethren whom we recommended to be received (3Jo 8, 10; compare Mt 10:40).

I will remember–literally, “I will bring to mind” before all by stigmatizing and punishing.

neither doth he … receive the brethren–with hospitality. “The brethren” are the missionaries on their journey.

forbiddeth them that would–receive them.

casteth them–those that would receive the brethren, by excommunication from the Church, which his influence, as a leading man (3Jo 9) in it, enabled him to do. Neander thinks that the missionaries were Jews by birth, whence it is said in their praise they took nothing from THE Gentiles: in contrast to other Jewish missionaries who abused ministers’ right of maintenance elsewhere, as Paul tells us, 2Co 11:22; Php 3:2, 5, 19. Now in the Gentile churches there existed an ultra-Pauline party of anti-Jewish tendency, the forerunners of Marcion: Diotrephes possibly stood at the head of this party, which fact, as well as this domineering spirit, may account for his hostility to the missionaries, and to the apostle John, who had, by the power of love, tried to harmonize the various elements in the Asiatic churches. At a later period, Marcion, we know, attached himself to Paul alone, and paid no deference to the authority of John.

is of God–is born of God, who is good.

hath not seen God–spiritually, not literally.

12. of all men–who have had opportunity of knowing his character.

of the truth itself–The Gospel standard of truth bears witness to him that he walks conformably to it, in acts of real love, hospitality to the brethren (in contrast to Diotrephes), &c. Compare Joh 3:21 “He that doeth truth cometh to the light, that his deeds may be made manifest that they are wrought in God.”

we also–besides the testimony of “all men,” and “of the truth itself.”

friends–a title seldom used in the New Testament, as it is absorbed in the higher titles of “brother, brethren.” Still Christ recognizes the relation of friend also, based on the highest grounds, obedience to Him from love, and entailing the highest privileges, admission to the intimacy of the holy and glorious God, and sympathizing Saviour; so Christians have “friends” in Christ. Here in a friendly letter, mention of “friends” appropriately occurs.

by name–not less than if their names were written [Bengel].