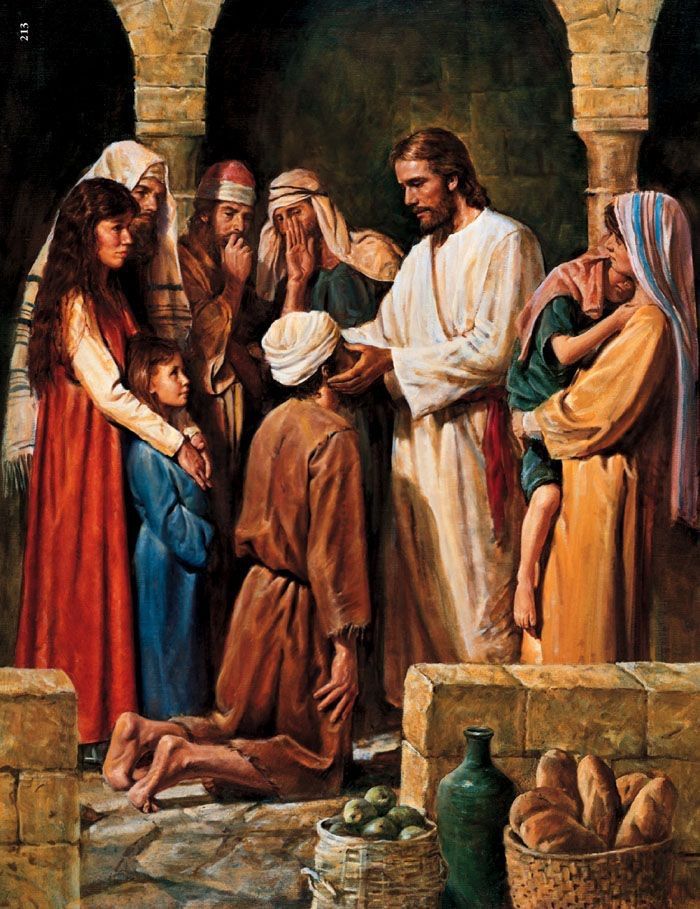 As Jesus and the disciples were about to leave Jericho, a large crowd followed them. Two blind men were sitting by the roadside and when they heard Jesus passing by, they shouted, “Lord, Son of David, have mercy on us!”

The crowd told the men to be quiet, but they shouted all the louder, “Lord, Son of David, have mercy on us!”

Jesus stopped and called to them.

They answered, “Lord, we want our sight.”

Jesus had compassion on them and touched their eyes. Jesus healed the blind men. Immediately they received their sight and followed him.

The crowds apparently believed that someone as important and occupied as Jesus did not have time to be bothered by someone as unimportant as a blind beggar. Such was not the case for the humble savior. Jesus paid no attention to the crowds’ chants – their pressure has no influence over his behavior. With mercy, Jesus healed the blind men.

Why do Matthew and Mark say Jesus was “leaving” Jericho but Luke says they were entering?

The verses tell us,

“As Jesus and his disciples were leaving Jericho, a large crowd followed them.”

Luke’s version, however, differs and says Jesus and the disciples were entering Jericho. Christian detractors often point out the discrepancy in an effort to discredit the Bible. The discrepancy is not a geographical contradiction. In this period, there were two Jerichos.

During Jesus’ day, an older part of Jericho lay on a hill and was largely abandoned. According to the historian Josephus, the new Jericho was located about 1 mile away. As expected, given their audience, Matthew and Mark reflect the Jewish vantage point and mention the old town that Jesus was leaving. Luke, with Greek influence, refers to the new town that Jesus was entering.

There is a second attribute of this story that leads some to surmise Matthew reported the incident erroneously or the incident was an entirely separate event from the one reported by Mark and Luke. That the events are the same, however, is clear. All descriptions of the event say it took place in Jericho and involved men sitting on the roadside. The conversation is nearly identical, and the outcomes are the same. So how do we account for the perceived discrepancy?

Pay careful attention to each of the stories. Mark 10:46 and Luke 18:35 do not say there was only one beggar. They simply focus on one of the men, Bartimaeus. This is likely because Bartimaeus would have been familiar to readers or possibly he was the one speaking (or the most vocal of the two). Either way, by naming him directly, they offer more substantive proof of the event that Matthew’s generic identification of “two blind men” may fail to provide.

This will be Jesus’ final display of authority before reaching Jerusalem.

Here we see Jesus demonstrate his final act of God’s authority before reaching Jerusalem. After raising a woman from the dead, Jesus merely touches the eyes of blind men and they can miraculously see again. Notice that the blind men appeal to Jesus as the lord, Son of David. In this manner, they are acknowledging him as the Messiah, a fitting response given the circumstances that are about to unfold.

Scientists have uncovered much archaeological evidence of Jericho. The original settlement dates back to 10,000 BC at Tell es-Sultan, north of modern-day Jericho. Archaeological evidence reveals that by 8,000 BC, the site had grown to more than 430,000 square feet (almost 10 acres) and was surrounded by a wall nearly 12-feet high and 6-feet wide. The population may have numbered 3,000 people.

After a few centuries, evidence shows us the first settlement was abandoned. This settlement lasted until about 6,000 BC. After this, new settlements were established in Jericho on a periodic basis as the town moved slightly about the area.

29 As Jesus and his disciples were leaving Jericho, a large crowd followed him. 30 Two blind men were sitting by the roadside, and when they heard that Jesus was going by, they shouted, “Lord, Son of David, have mercy on us!”

31 The crowd rebuked them and told them to be quiet, but they shouted all the louder, “Lord, Son of David, have mercy on us!”

32 Jesus stopped and called them. “What do you want me to do for you?” he asked.

34 Jesus had compassion on them and touched their eyes. Immediately they received their sight and followed him.

20:29 As they were leaving Jericho, a large crowd followed them. 20:30 Two blind men were sitting by the road. When they heard that Jesus was passing by, they shouted, “Have mercy on us, Lord, Son of David!” 20:31 The crowd scolded them to get them to be quiet. But they shouted even more loudly, “Lord, have mercy on us, Son of David!” 20:32 Jesus stopped, called them, and said, “What do you want me to do for you?” 20:33 They said to him, “Lord, let our eyes be opened.” 20:34 Moved with compassion, Jesus touched their eyes. Immediately they received their sight and followed him.

29 Now as they went out of Jericho, a great multitude followed Him. 30 And behold, two blind men sitting by the road, when they heard that Jesus was passing by, cried out, saying, “Have mercy on us, O Lord, Son of David!”

31 Then the multitude warned them that they should be quiet; but they cried out all the more, saying, “Have mercy on us, O Lord, Son of David!”

32 So Jesus stood still and called them, and said, “What do you want Me to do for you?”

33 They said to Him, “Lord, that our eyes may be opened.” 34 So Jesus had compassion and touched their eyes. And immediately their eyes received sight, and they followed Him.

32 Jesus stopped and called over, “What do you want from me?”

34 Deeply moved, Jesus touched their eyes. They had their sight back that very instant, and joined the procession.