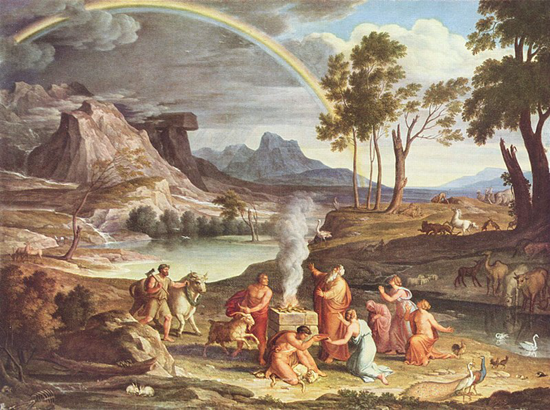 What is a biblical covenant?

Covenants in the bible may be categorized as (1) those made between God and Man, (2) the “New Covenants” introduced in the New Testament, and (3) various minor promises that could be regarded as covenants (by definition). No true “list” of covenants is given in the Bible but rather, inferred by instances of God’s promises to man as revealed through scripture.

Major covenants between God and Man

The following are the major covenants made between God and Man in the order they appear in the Bible.

In Genesis 9:8, God issued the Noahic covenant promising to never again destroy all life on Earth by flood. The rainbow symbolizes this everlasting covenant between God and every living creature on earth.

Also known as the Brit bein HaBetarim (Covenant Between the Parts), the Abrahamic covenant was issued by God to Abraham and his offspring. In Genesis 12 and Genesis 15, God grants land for Abraham and his descendants with no conditions placed on the covenant for fulfillment. In Genesis 17, the covenant of circumcision is issued as a condition to the promise from God to make Abraham a great nation, to give his descendants land from the river of Egypt to the Euphrates (aka the Promised Land), and to make Abraham the father of many nations.

In Exodus 19, God issues the Mosaic covenant promising to make the Israelites his treasured possession among all people, a “kingdom of priests and a holy nation” – if they follow God’s commandments. As part of the covenant, God gives Moses the Ten Commandments.

At the end of Israel’s forty years of wandering, the Priestly covenant was made between God and Aaron and his descendants in Numbers 25:10 (and Exodus 40:12) in which God gave the tribe of Levi the responsibility to serve as Israel’s priests. The covenant was delivered to Phinehas, Aaron’s grandson, promising an everlasting priesthood as a reward for Phinehas’ religious zeal.

Covenants between God and Israel were clarified and extended in God’s covenant with David. In 2 Samuel 7:8 and 2 Samuel 23:5, the everlasting Davidic covenant was introduced to include David’s royal lineage in God’s plan.  It is interpreted by Christians as a messianic covenant. The covenant consisted of three promises: a dynastic lineage, a kingdom, and a throne. As part of the covenant, God revealed that he would be the father to David’s son, who would act as God’s representative on earth.

The New Covenant is the promise that God makes with mankind that he will forgive sin and restore fellowship with those whose hearts have turned toward him. It was alluded to in the Old Testament by the prophets Moses (who in Deuteronomy 29, predicted Israel would fail the Old Covenant but be given a time of restoration), Jeremiah (who in Jeremiah 31, prophesized the day would come when a new covenant is made with the people of Israel and Judah), and Ezekiel (who predicted in Ezekiel 36, a new heart and new spirit would be placed in mankind).

It was instituted at the Last Supper

Jesus is the mediator

Jesus is the mediator (between Man and God) of the New Covenant.

His blood served as the required blood of the covenant

Jesus’ death on the cross confirms what Jesus told the disciples at the Last Supper and is the basis for God’s promise. Jesus’ death served as an act of ratification and was the moment when Gentiles were brought into the New Covenant (Acts 10, Ephesians 2:13)

Potential covenants per definition of a covenant

The following are more specific instances of promises made by God. Some fall within the covenants mentioned above while others are single promises that are typically not included in the list of “major covenants” discussed above.

Known as the Edenic covenant (see Genesis 1:26 through Genesis 2:3), it was a conditional covenant between God and Adam governing man’s creation and life in Eden with complete innocence. It was broken shortly after it was made when Adam and Eve ate from the Tree of Knowledge of Good and Evil.

Known as the Adamic covenant, it was an unconditional covenant (Genesis 3:14) made between God and mankind. It cursed the serpent, introduced physical and spiritual death, and changed women’s status.

As part of the Noahic covenant, the promises made in Genesis 9:8 are sometimes inferred to include God’s promise of civil governance.

A sub category of the Abrahamic covenant, the covenant made in Genesis 12:1, blessed Abram with the promise to make his name great.

A sub category of the Abrahamic covenant, In Genesis 15:9, God promised Abram and his descendants the land from the Wadi of Egypt to the Euphrates river – the land of the Kenites, Kenizzites, Kadmonites, Hittites, Perizzites, Rephaites, Amorites, Canaanites, Girgashites and Jebusites.

A sub category of the Abrahamic covenant, in Genesis 17:9, God placed the condition of circumcision upon every male.

In Genesis 22:17, God promises to make Abraham’s descendants as “numerous as the stars in the sky” and ensures they will take possession of the cities of their enemies and that through their offspring, “all nations on earth will be blessed” because of Abraham’s obedience to God.

In Exodus 19:5, God confirms that if his rules are obeyed, Israel will become a “treasured possession”.

In Deuteronomy 30, God tells Israel that if they return to the Lord and obey him with all their heart, then he will restore their fortunes and gather them again from all the nations where they have been scattered.

In 2 Samuel 7:8, God tells David (through the prophet Nathan) that he will make his name great, “like the names of the greatest men on earth”. In one of the most vivid messianic prophecies in the Bible, God says, “When your days are over and you rest with your ancestors, I will raise up your offspring to succeed you, your own flesh and blood, and I will establish his kingdom. He is the one who will build a house for my Name, and I will establish the throne of his kingdom forever. I will be his father, and he will be my son.”

In Luke 1:68, we are told the prophet Zechariah prophesied about John the Baptist, a “prophet of the Most High” who will “go on before the Lord to prepare a way for him”. In the prophecy, he confirms the covenants made with David and Abraham.

In Matthew 26:28, Jesus makes a covenant with his disciples when he tells them, “This is my blood of the covenant, which is poured out for many for the forgiveness of sins. I will not drink from this fruit of the vine from now on until the day when I drink it new with you in my Father’s kingdom.”

Acts 2 recounts a story of the wind sweeping through the church filling the occupants with the Holy Spirit and prompting each to begin speaking in foreign languages. Peter addresses the crowd, telling them God will pour his spirit on all people – sons and daughters will prophesy, men will see visions, and old men will dream dreams – and anyone who calls on the name of the Lord will be saved.

In Acts 9, the Lord instructs Ananias to find Saul (Peter) and let him know that he is the “chosen instrument” to proclaim his word to the Gentiles. Upon finding Saul and relaying the message, Saul’s sight is returned and he begins travelling through the lands spreading Jesus’ message of salvation.

2 Thessalonians 2:1 talks of the tribulation period and explains that the “day of the Lord” has not come and will not come until Satan is revealed, exalts himself over all others, and sets himself up in God’s temple proclaiming himself to be God.

Revelation 20 tells the story of Satan’s destruction and subsequent released to “go out to deceive the nations in the four corners of the earth” before being thrown into the lake of burning sulfur “where the beast and the false prophet had been thrown”. It reveals that the dead will be judged according to what they have done and anyone whose name is not found written in the book of life will be thrown into the lake of fire.

The new heaven and the new earth (Revelation 21)

In Revelation 21, God reveals “a new heaven and a new earth” where God will wipe every tear from every eye, where death, mourning, and pain will not exist. Everything will be new.

In Luke 1:26, we see an angel tell Mary, “Do not be afraid Mary, you have found favor with God. You will conceive and give birth to a son, and you are to call him Jesus. He will be great and will be called the Son of the Most High. The Lord God will give him the throne of his father David, and he will reign over Jacob’s descendants forever. His kingdom will never end.”