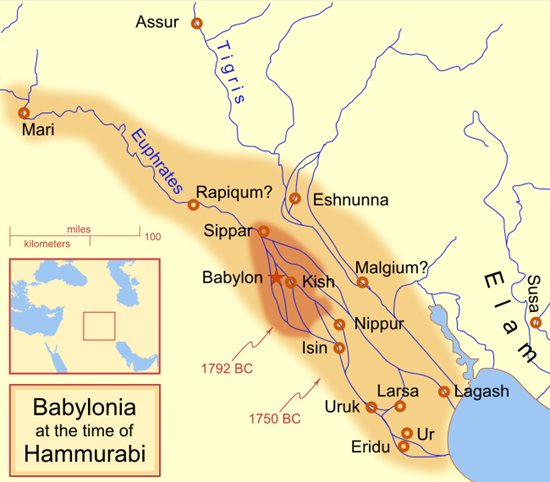 The Epic of Gilgameš is one of the most famous texts from ancient Babylonia. It tells the story of a king who is trying to find immortality, and meets Ut-napištim, who has survived the Great Flood and has found what Gilgameš is looking for. In the following text, tablet of XI of the standard edition composed in c.1100 BCE, Ut-napištim tells what had happened to him. It is sometimes an almost verbatim quote from the Epic of Atrahasis.

[11.1] Gilgameš spoke to Ut-napištim, the Faraway:
“I have been looking at you,
but your appearance is not strange – you are like me!
You yourself are not different – you are like me!
My mind was resolved to fight with you,
but instead my arm lies useless over you.
Tell me,
how is it that you stand in the Assembly of the Gods, and have found life?”

[11.8] Ut-napištim spoke to Gilgameš, saying:
“I will reveal to you, Gilgameš, a thing that is hidden,
a secret of the gods I will tell you!
Šuruppak, a city that you surely know,
situated on the banks of the Euphrates,
that city was very old, and there were gods inside it.

[11.14] The hearts of the Great Gods moved them to inflict the Flood.
Their Father Anu uttered the oath,
Valiant Enlil was their Adviser,
Ninurta was their Chamberlain,
Ennugi was their Minister of Canals.

[11.19] Ea, the Prince, was under oath with them
so he repeated their talk to the reed house:

[11.27] Make [the seed of] all living beings go up into the boat.
The boat which you are to build,
its dimensions must measure equal to each other:
its length must correspond to its width.

[11.36] Ea spoke, commanding me, his servant:
‘You, well then, this is what you must say to them:
“It appears that Enlil is rejecting me

[11.40] so I cannot reside in your city,
nor set foot on Enlil’s earth.
I will go down to the Apsu to live with my lord, Ea,
and upon you he will rain down abundance,

He will bring to you a harvest of wealth,
in the morning he will let loaves of bread shower down,
and in the evening a rain of wheat!”‘

[11.48] Just as dawn began to glow
the people assembled around me.

[11.54] The child carried the pitch, the weak brought whatever else was needed.
On the fifth day I had laid out her exterior.
It was a field in area,
its walls were each 10 times 12 cubits in height,
the sides of its top were of equal length, 10 times 12 cubits each.note
[11.58] Then I designed its interior structure as follows:
I provided it with six decks,
thus dividing it into seven levels.
The inside of it I divided into nine compartments.
I drove plugs to keep out water in its middle part.
I saw to the punting poles and laid in what was necessary.

[11.70] I butchered oxen for the carpenters,
and day upon day I slaughtered sheep.
I gave the workmen beer, ale, oil, and wine,
as if it were river water,
and they made a party like the New Year’s Festival!

[11.75] I set my hand to the finishing of the ship.
The boat was finished by sunset.
The launching was very difficult:
They had to keep carrying a runway of poles front to back,
until two-thirds of it had gone under water.

[11.86] all the beasts and animals of the field and the craftsmen I had go up.

[11.87] Šamašnote had set a stated time:
‘In the morning I will let loaves of bread shower down,
and in the evening a rain of wheat!
Go inside the boat, seal the entry!’

[11.89] That stated time had arrived.
In the morning he let loaves of bread shower down,
and in the evening a rain of wheat.
I watched the appearance of the weather:
the weather was frightful to behold!

[11.93] I went into the boat and sealed the entry.
For the caulking of the boat, to Puzur-Amurri, the boatman,
I gave the palace together with its contents.note
[11.96] Just as dawn began to glow
there arose from the horizon a black cloud.
Adadnote rumbled inside of it,
before him went Šhullat and Haniš,note
heralds going over mountain and land.

[11.101] Erragal pulled out the mooring poles,
forth went Ninurta and made the dikes overflow.note
[11.103] The gods lifted up the torches,
setting the land ablaze with their flare.

[11.105] Stunned shock over Adad’s deeds overtook the heavens,
and turned to blackness all that had been light.

[11.109] blowing fast – and then the Flood came, overwhelming the people like an attack.

[11.111] No one could see his fellow, they could not recognize each other in the torrent.

[11.113] Even the gods were frightened by the Flood,
and retreated, ascending to the heaven of Anu.
The gods were cowering like dogs, crouching by the outer wall.

[11.124] The gods -those of the Anunnaki- were weeping with her,
the gods humbly sat weeping, sobbing with grief,
their lips burning, parched with thirst.

[11.127] Six days and seven nights
came the wind and flood,
the storm flattening the land.

[11.129] When the seventh day arrived,
the storm was pounding.
She who had been struggling with itself like a woman writhing in labor,
the sea, calmed; the whirlwind fell still; the flood stopped.

[11.136] I opened a vent and daylight fell upon my cheek.
I fell to my knees and sat weeping,
tears streaming down my cheeks.
I looked around for coastlines in the expanse of the sea,
and at twelve leagues there emerged a region of land.

[11.147] I sent forth a dove and released it. The dove went off, but came back to me;
no perch was visible so it circled back to me.

[11.150] I sent forth a swallow and released it.
The swallow went off, but came back to me;
no perch was visible so it circled back to me.

[11.153] I sent forth a raven and released it.
The raven went off, and saw the waters slither back.
It eats, it scratches, it bobs, but does not circle back to me.

[11.156] I sacrificed: I offered a libation to the four corners of the world,
I burned incense in front of the rising mountain.
Seven and seven cult vessels I put in place,
and ;into the bowls I poured [the oil of] reeds, cedar, and myrtle.

‘You gods, as surely as I shall not forget this lapis lazuli around my neck,

[11.171] Just then Enlil arrived.
He saw the boat and became furious,
he was filled with rage at the Igigi gods:
‘Where did a living being escape?

[11.176] Ninurta spoke to Valiant Enlil, saying:
‘Who else but Ea could devise such a thing?
It is Ea who knows every machination!’

[11.180] Ea spoke to Valiant Enlil, saying:
‘It is yours, O Valiant One, who is the Sage of the Gods.
How, how could you bring about a Flood without consideration
Charge the violation to the violator,
charge the offense to the offender,
but be compassionate lest (mankind) be cut off,
be patient lest they be killed.

[11.196] It was not I who revealed the secret of the Great Gods,
I only made a dream appear to Atrahasis, and thus he heard our secret.note
Now then! The deliberation should be about him!’

[11.203] But now let Ut-napištim and his wife become like us, the gods!
Let Ut-napištim reside far away, at the Mouth of the Rivers.’

Now then, who will convene the gods on your behalf,note
that you may find the life that you are seeking!
Wait! You must not lie down for six days and seven nights.”