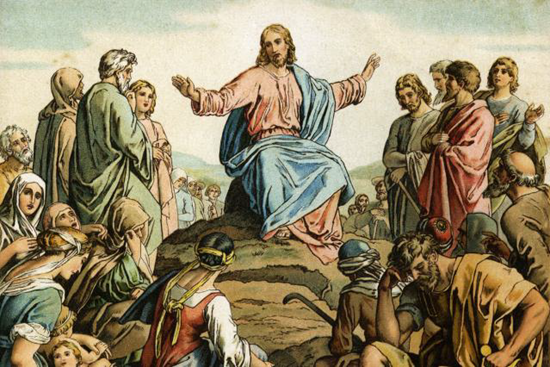 Jesus told his followers, “When you fast, do not look gloomy as the hypocrites do, for they twist their faces to show others that they are fasting and uncomfortable. Truly I tell you, they have already received their reward in full.”

The intent of our actions should be to glorify God, not others

In Jesus’ day, fasting emphasized denial of the needs of the body – a means to curb the desires of the human body and force a person to focus on God. Pharisees however, used fasting to glorify and draw attention to themselves. Pharisees publicly fasted in hopes that other men would admire them as devout, dedicated followers of God.

Jesus again stresses that our actions should not be made to glorify ourselves but rather to glorify God (who sees everything we do, even if done in secret).

In Jesus’ day, the most adherent Jews refrained from eating or drinking during daylight hours (from sunset to sundown) two days each week (Monday and Thursday). Less dedicated Jews fasted only one day per week and some chose to avoid fasting altogether (fasting was more of a tradition than a requirement). The time of fasting was an opportunity to publicly proclaim their act of dedication by wearing “mourning dress” when fasting or dousing their faces with dust or ashes to give them a deprived, sickly appearance.

Some Jewish sects would include additional restrictions when “afflicting oneself” through fasting. Some would not only abstain from consumption of food, but dangerously, would also avoid consuming water and liquids. Many would avoid shaving and washing their clothes while limiting social interaction and sexual intercourse. In some instances, such as mourning the death of a family member, even more radical restrictions would be introduced.

Taking these practices into consideration, if taken literally, Jesus tells his followers that all such extreme practices should be prohibited which of course, certainly enforces God’s plan for the health of our bodies.

Does the Bible command fasting?

Jews were not alone in their practice of fasting – most major religions include periodic fasting as a rite of spiritual purification. This presents a dilemma however, when we recognize that the Bible does not specifically command fasting.

The only fast required by the Law of Moses was the annual Great Day of Atonement (aka “The Fast”) mentioned in Leviticus 23:26-32 when God commanded his people to fast on the tenth day of the seventh month during an annual sacred assembly of the people. Beyond that, fasting seems to have worked its way, with good intent, into the Jewish religious tradition and to some degree, into the Christian faith.

Today fasting is more a means to practice discipline than a requirement of the Christian religion. After all, if you can deprive yourself of necessary sustenance, it should be easy to deprive yourself of worldly temptations. Regardless of the intent, fasting or not, devotion in your heart to God is key.

If you are new to fasting, here are a few ideas to get you started – slowly and gently.

You can begin by eating a diet that restricts you to a raw food diet of fruits, vegetables, seeds, and nuts or start with a “mono” diet that includes only one type of food. For instance, only consume fruit, rice gruel, green smoothies, freshly pressed vegetables or fruits, salads, or vegetable broths.

It is possible to work your way into fasting by eating an early dinner and refraining from food for a 16-hour period before eating breakfast. You may also want to scale back on any social engagements and let your friends and family know that you are about to fast (their support will be appreciated).

Some people experiencing tiredness, moodiness, weakness, insomnia, and possibly even light headaches when fasting for the first time. If this is the case, try to schedule time to sit and relax or set aside periods during the day where you can take a brief nap.

Oiling of the body as a means to clean oneself

Jesus instructs his followers to oil their heads and wash their bodies so as not to appear to be in discomfort from fasting. In modern day, oiling of the body seems contradictory to bathing (most of us bathe to wash excess oil from our skin and hair). In Jesus’ day however, it was a normal practice to oil one’s body as a means of cleaning.

Citizens of Jesus day would, as a course of their daily hygiene, trim their beards and change clothes before appearing in public. They would also typically wash their face and anoint themselves with oil, paying particular attention to oiling the face and top of their head (which could easily dry out in the arid environment they lived in). This practice was also common in Greece where Greeks would oil their bodies before exercise and then scrape off the dirt, sweat, and oil by means of a curved metal instrument called a strigil.

Fasting and your health

Although to many it sounds like a “new age” health practice, as of 2015, science suggests that intermittent fasting not only fights obesity but may help curb diseases such as diabetes, heart disease, cancer, lupus, arthritis, chronic-skin conditions such as psoriasis and eczema, and Alzheimer’s. The benefits of fasting has long been known. For instance, scientists have known for many years that fasting before major medical procedures is beneficial to the patient.

Are our eating patterns abnormal?

Researchers point out that our common eating pattern, i.e. three meals per day, may be “abnormal” from the perspective of human evolution. For instance, ancient hunters often ate only intermittently which suggests that “the ability to function at a high level both physically and mentally during extended periods without food may have been crucial in human evolution”. In other words, the human body may have adapted to perform at its best during intermittent fasting.

Research suggests that in animals, intermittent fasting can fend off or reverse illnesses such as cancer, diabetes, heart disease, and neurodegenerative disorders. Scientists believe that when fasting, animals respond better to stress that might otherwise damage their bodies. Furthermore, studies have shown that when animals are fed fewer calories, they live longer. Even more effective, studies on animals ranging from earthworms to monkeys have shown that alternating cycles of fasting and calorie-restricted diets is a reliable way to extend the lifespan.

The circadian cycle and our eating patterns

Scientific studies also suggest that the human body may respond better to meals eaten at certain times of the day. The reason, scientists suspect, is because of our body’s circadian rhythms which follow the natural patterns of day and night (i.e. food is eaten during the day and we “fast” and night during sleep). It is important however, to note that most scientists do *not* believe fasting is an effective or healthy weight loss tool and in fact, science suggests fasting may even be dangerous for persons with liver or kidney problems.

Can fasting “detoxify” the body?

Many doctors and scientists believe that fasting may “detoxify” the body. Diets containing a higher-than-normal amount of processed foods can cause a buildup of waste products in the cellular tissue which leads to atherosclerosis, aging, diabetes, nerve damage, and deterioration of organs. This is especially impactful for persons whose diets contain processed foods and foods low in antioxidants, which unfortunately, includes most people in modern countries. Fasting may allow the body to most effectively remove these waste products (in fact, the some degree, the body does this each and every night while we sleep).

The reason for the detoxification effect is simple. When you go without eating for more than a day or two, the body enters into ketosis which occurs when the body runs out of carbohydrates and begins to burn fat for energy. Fat is where the body stores many of the toxins that it absorbs from the environment.

Most psychologists agree that fasting yields psychological benefits as well. It is believed that fasting may help patients cope with stress and depressions and many believe fasting is a good “first step” to encourage a patient to “take control of their lives”.

Do not look “somber”

The word used to describe the Pharisees’ appearance during fasting is typically translated as “somber”. This word is uncommon and only occurs twice in the New Testament. Its meaning describes a look of grief, pain, or displeasure akin to the word “sour” in a modern-day phrase such as “sour-faced”.

16 “When you fast, do not look somber as the hypocrites do, for they disfigure their faces to show others they are fasting. Truly I tell you, they have received their reward in full. 17 But when you fast, put oil on your head and wash your face, 18 so that it will not be obvious to others that you are fasting, but only to your Father, who is unseen; and your Father, who sees what is done in secret, will reward you.

“When you practice some appetite-denying discipline to better concentrate on God, don’t make a production out of it. It might turn you into a small-time celebrity but it won’t make you a saint. If you ‘go into training’ inwardly, act normal outwardly. Shampoo and comb your hair, brush your teeth, wash your face. God doesn’t require attention-getting devices. He won’t overlook what you are doing; he’ll reward you well.

6:16 “When you fast, do not look sullen like the hypocrites, for they make their faces unattractive so that people will see them fasting. I tell you the truth, they have their reward. 6:17 When you fast, put oil on your head and wash your face, 6:18 so that it will not be obvious to others when you are fasting, but only to your Father who is in secret. And your Father, who sees in secret, will reward you.

16 Moreover when ye fast, be not, as the hypocrites, of a sad countenance: for they disfigure their faces, that they may appear unto men to fast. Verily I say unto you, They have their reward. 17 But thou, when thou fastest, anoint thine head, and wash thy face; 18 That thou appear not unto men to fast, but unto thy Father which is in secret: and thy Father, which seeth in secret, shall reward thee openly.