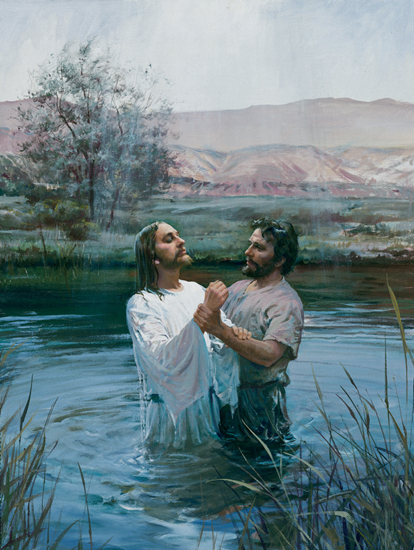 As John the Baptist had foreseen, Jesus travelled from Galilee to the Jordan to be baptized by John. John tried to deter Jesus saying, “But, I should be baptized by you!” But Jesus insisted explaining, “It is proper for us to do this to fulfill all righteousness.”

As requested, John baptized Jesus. When Jesus rose from the water, the skies opened and the “Spirit of God” descended from the sky to Jesus. A voice from heaven proclaimed, “This is my Son, whom I love. With him I am well pleased.”

The importance of humility and its relationship to confidence

The humility demonstrated by both John the Baptist and Jesus is a trait that Jesus will demonstrate time and time again throughout the New Testament stories. John, humble enough to recognize Jesus’s importance and Jesus, who insisted on baptism despite his absence of sin – both demonstrate humility, a trait God wishes us to exhibit in our everyday lives (Luke even adds that Jesus waited for everyone else to be baptized first). God will smile upon those who are humble, and bring down those who are proud and boastful.

Many may be unsure and/or unaware that humility and confidence are not mutually exclusive traits. Although desirable, a person who is both confident and humble is often hard to find. Confidence implies belief in your abilities, an especially important trait in Western societies. Remaining humble implies you are open to others. From everything written about Jesus in the New Testament, it is apparent that he possessed both traits – confidence and humility.

The baptism of Jesus – the beginning of an earth-shattering ministry

The baptism of Jesus serves as the starting point for Jesus’s New Testament ministry – a sort of inauguration of his messianic ministry. By ‘fulfilling all righteousness”, Jesus completed a rite that identified him with common man (a rite that was soon to be adopted by all who followed the Christian faith) and publicly professed his religious position before John the Baptist and his followers. That the moment of baptism was validated by supernatural events from heaven (God’s “seal of approval”) must have surely struck those in attendance with awe. Jesus, having taken the first step towards carrying out the will of God, was now ready to begin his earth-shattering ministry.

Matthew tells us that John felt unworthy to baptize Jesus whose divinity was already recognized by some (perhaps by many). In fact, given Jesus’ sinless nature, baptism could be seen as redundant or unnecessary. Jesus however, insisted on baptism in order to “complete” the ritual act, to full all righteousness. Baptism was a means of identification with the kingdom of God and even though he had nothing for which to repent, Jesus likely chose to fulfill the rite, both for himself and for witness to others. Many view this act as a symbol of Jesus’ acceptance of the sins of mankind.

Heavens open, spirit descends, and a voice from heaven

The scriptures describe the moment of Jesus’ baptism as rapturous. Heaven was opened, the Spirit of God descended from the sky, and a voice spoke from the heavens. For all appearances, the acts of heavens parting and an audible voice from the sky occurred in a physical sense (the scriptures are a bit too vague to allow us to say without question that the “spirit descending” was a physical manifestation seen by Jesus, John, or everyone present). The heavens visibly broke, possibly the clouds in the sky parted, and something physical in appearance descended from the sky to land upon, touch, or hover above Jesus. That an audible voice spoke is without question. This was the first time God’s voice had been heard on Earth in hundreds of years (or at least since recorded in the close of the Old Testament). Truly something magnificent occurred that day and it signified, and gave credence to, the beginning of Jesus’ public ministry.

The supernatural events that occurred as Jesus was baptized are difficult to reconcile with scientific expression. Certainly the skies “opening up” is easy to envision but an audible voice from heaven and a spirit descending from the skies bears no scientific equivalent. To that end, there are many modern-day heavenly events that science has yet to fully explain. This is a good example of a biblical event that some scientists have trouble wrapping their heads around.

The original words used to describe the moment the heavens opened convey a sense of immediacy and describe an action that takes place instantly, without additional intervening triggers or prompts. Literally, the instant Jesus rose from the water, the heavens opened.

Exclamatory remarks with no English equivalent

The Greek words used to describe the opening of the heavens contained exclamatory remarks that have no equivalent in the English language. The original Greek phrase “behold the heavens”, somewhat similar to the modern-day phrase “lo and behold” is omitted in many translations as there is no corresponding English equivalent.

Most translations describe the heavenly events using phrases such as “heaven was opened” and “a voice from heaven”. The original Greek word used for “heaven” is synonymous with “sky” indicating that the skies opened and a voice was heard from above.

The phrase “like a dove” was a descriptive comparison only. The spirit that descended (which likely did contain some type of bodily form) was not truly a dove but rather, descended in a manner like a dove (e.g. flew, floated, or fluttered down).

15 Jesus replied, “Let it be so now; it is proper for us to do this to fulfill all righteousness.” Then John consented.

16 As soon as Jesus was baptized, he went up out of the water. At that moment heaven was opened, and he saw the Spirit of God descending like a dove and alighting on him. 17 And a voice from heaven said, “This is my Son, whom I love; with him I am well pleased.”

Jesus then appeared, arriving at the Jordan River from Galilee. He wanted John to baptize him. 14 John objected, “I’m the one who needs to be baptized, not you!”

15 But Jesus insisted. “Do it. God’s work, putting things right all these centuries, is coming together right now in this baptism.” So John did it.

16 The moment Jesus came up out of the baptismal waters, the skies opened up and he saw God’s Spirit—it looked like a dove—descending and landing on him. 17 And along with the Spirit, a voice: “This is my Son, chosen and marked by my love, delight of my life.”

3:13 Then Jesus came from Galilee to John to be baptized by him in the Jordan River. 3:14 But John tried to prevent him, saying, “I need to be baptized by you, and yet you come to me?” 3:15 So Jesus replied to him, “Let it happen now, for it is right for us to fulfill all righteousness.” Then John yielded to him. 3:16 After Jesus was baptized, just as he was coming up out of the water, the heavens opened and he saw the Spirit of God descending like a dove and coming on him. 3:17 And a voice from heaven said, “This is my one dear Son; in him I take great delight.”

13 Then cometh Jesus from Galilee to Jordan unto John, to be baptized of him. 14 But John forbad him, saying, I have need to be baptized of thee, and comest thou to me? 15 And Jesus answering said unto him, Suffer it to be so now: for thus it becometh us to fulfil all righteousness. Then he suffered him. 16 And Jesus, when he was baptized, went up straightway out of the water: and, lo, the heavens were opened unto him, and he saw the Spirit of God descending like a dove, and lighting upon him: 17 And lo a voice from heaven, saying, This is my beloved Son, in whom I am well pleased.